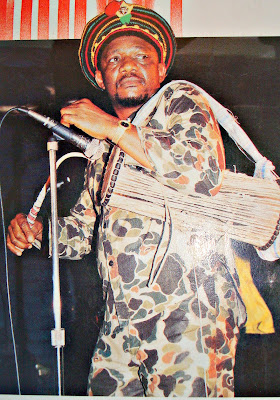 I had watched the Chief Priest, Fela Anikulapo Kuti perform at then Greek Amphitheater and UCLA's Royce Hall in the Southland, and both concerts were big events attracting an overwhelming, versatile audience. Both shows were in big arenas and were filled to capacity.

I had also watched King Sunny Ade in one of his brilliant performances at several gigs and arenas in the Southland; among them: the Hollywood Palladium in Hollywood and the seaside Coach House in San Juan Capistrano. As usual, in those heydays, Ade was a true performer who mastered his craft of handling the strings like other noted guitarists of the day.

I had, too, watched other performers in smaller gigs perform here in the Southland -- Wasiu Ayinde and the rest Fuji and Akpala casts display their ballads and melodies.

With all the phenomenal shows including that of the Chief Priest, I watched Sonny Okosuns once during his U.S. tours. Okosuns was booked to perform at the Executive Club on the Crenshaw thoroughfare ran by one Dr. Akalaonu who also ran a clinic in the neighborhood. Akalaonu had opened the night club to enable Greater Los Angeles Nigeria Diaspora have a place for social gatherings which included gigs, booking Nigerian performers and other African artists to entertain folks in Los Angeles with traditional African blend rhythms.

Okosuns performance in the jam-packed Executive Club was totally different from what I had seen and known from his earlier shows in the 1970s when he had exploded with the prophesies of Ozziddism.

In the 1960s, music was already echoing around the West Coast of sub-Saharan Africa and with what had invaded the region during colonial conquest, Western-style music became the trend and was emulated from all the musical genres of the day, leaving behind some elements of the music standard that had been known during the period.

A whole lot had erupted as a result with creations of rhythms and compositions as standard was somehow slipping away..

Okosuns had been the maker of his own music shying away from the commercial success of the era and putting into perspective what he considered mattered at the time - when the entire African continent had been ran with varieties of social problems - Apartheid and numerous struggles for independence from European colonists.

Born on January 01, 1947 and growing up in Enugu in the 1950s and 1960s, Okosuns, coming of age in the highlife era had wanted to be an actor though his father wanted him to be an engineer which he ignored forming his first band, The Postmen in Enugu, in 1965. During the pogrom and eruption of the Nigerian Civil War, Okosuns and his family fled Enugu to Lagos where he connected with projects he had encountered during the Commonwealth Arts Festival in London, landing a job at the Nigerian Television Authority as a graphic artist.

The outbreak of war had obviously slowed down pub-crawlers and nightlife in Lagos; and, with Igbo performing artists - Zeal Onyia, Rex Lawson, Celestine Ukwu, pop groups like the Attractions, Fractions and several other Igbo session men - who had fled Lagos back to the East, the entertainment industry of a highly themed vibes of Igbo casts disappeared and with constant blackouts as a result of the war, music and night life was minimized with Victor Olaiya, Bobby Benson, Roy Chicago and others of Yoruba origin who played occasionally.

In 1969, Okosuns joined the Victor Uwaifo Melody Maestros Band, embarking on tours in Ghana, Sierra Leone coupled with an European and Japanese tours, riding high with the"Joromi" and "Guitar Boy" success. At the end of the tour in 1970 and a war ravaged Eastside, Okosuns split with Uwaifo and formed his own band when others were doing the same.

1970s was the boom in Nigeria's entertainment industry. The Chief Priest had returned from his US tour recording LA Sessions, creating the Africa 70 Band and the coinage Afrobeat. The funkster Johnny Haastrup had returned from Europe after jam sessions and gigs with the Ginger Baker's Airforce. Haastrup had breezed in with James Brown's ideas blending it with Jimi Hendrix fixes when "Hey Joe" and "Traffic" was the acts of the day. Most Igbo groups from the remnants of the pre-war time regrouped and emerged staying on the Eastside entertaining folks in and around the cities. The days of the Heartbeats and Clusters had seemingly waned.

By then, Okosuns had created the Paperback Limited Band which appealed to younger audiences though he wanted to play his own kind of music without regard to the commercial effects. "I got all the youth, you know, who were so much interested in underground, but I lost them when they started listening to the kind of music I was playing. I wasn't playing...Jimi Hendrix kind of music or the Who or the Kinks kind of music...That's what the youth wanted to hear. You see I was in the crossroads. I was winning one way but losing in many ways. If I had to be a professional musician, I must have a message," Okosuns tells Gary Stewart in one of his interviews. As a result of finding himself in the crossroads and copyrighted songs, Okosuns disbanded Paperback Limited and created Ozziddi from the Igbo dialect ozi di meaning there is a message and adapted from the play Ozidi by John Pepper Clark, from around which his kind of music would evolve.

On the successful launching of Ozziddi and Ozziddism music, "Help" was released as a single and remarkably became a smash hit in the Nigerian music scene. Okosuns had changed his styles and adapted versions from roots reggae giving him insights and the opportunity to tour with Jimmy Cliff and Toots & the Maytals when they visited Nigeria; following later songs "Fire In Soweto" and "Holy Wars" albums with full blown reggae tunes in protest of the internal strife in and around the African continent, with his kind of crossover beats and how he had wanted his music to stay.

"Reggae gives you space to write the kind of lyrics, protest lyrics especially, that we like to write. But I still very much love the hard African song. We trained ourselves to be able to write some hard protest songs into African songs like 'Papa's Land' and 'Tell Them Too.' I must say that I have learned from the past experience from other people that when you are struck with one kind of beat and when that beat fades, then you fade along with it. You see, to be a real good musician, you should be able to touch a lot of things," says about crossing over and exploring other avenues, in his interview with Stewart.

Okosuns was one of several Nigerian musicians who declined to relocate abroad because of Nigeria's weakening economy and unattractive music as a result of European and American imports invasion. He hung in there through the 1980s composing, arranging and producing songs for upcoming talents in the industry. On why there was no need to relocate for better gigs and showtimes elsewhere, in his interview with Okosuns while in New York on a tour, Stewart writes;

In 1985, Okosuns joined the casts of "Sun City," a benefit record to aid the fight against apartheid alongside Run D.M.C, Bob Dylan, Bruce Sprinsteen, Miles Davis, Ruben Blades, Soweto-based group Malopoets and others. Okosuns made his music in Igbo, Yoruba, Edo and English reaching out to his audience with his musical range that included reggae, highlife, afro-rock, afro-funk, and gospel music among others.