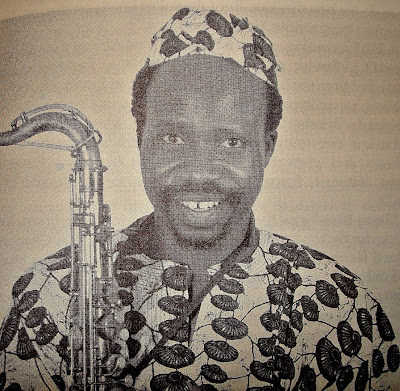 
How did all the music that we listen to evolve? Time after time, musicologist are still trying to figure the whole thing out; especially with the development of musical genres and in what area the evolution began. I was talking to music instructor and well versed musicologist and pianist, Derek Smith, in Los Angeles, and we begun the relative discourses with the cats of the time when music had no meaning in the African perspective, and how all that creativity in terms of the branches in all music categories 'goes together,' and the changes as a result of what had been tried at the times, the experiments.

Smith has been around quite a bit, and his knowledge in music is seriously overwhelming. He picks up anyone for our discourse in his unlimited knowledge of the jazz ensembles at the time when jazz had taken its momentum from be-bop, swing, big band to the recognition of performers who had mastered their instruments to be known for handling uniquely the very instrument they played - trumpet, saxophone the drums, harmonica, flute, guitar, the bass, piano and all that associated with the ensembles that gave jazz a place in musical notes - with jazz greats who emerged like, Gerry Mulligan, Earl Warren, Lester Young, Miles Davis, John Coltrane, Art Blakey, Paul Chambers, Lee Morgan and even in unknown times of the master trombonist J.J. Johnson, Shorty Rogers, including Michael Brecker's arrival in a band that had in its list, his brother Randy, trombonist Barry Rogers, drummer Billy Cobham, Jeff Kent and Doug Lubahn; and the creation of the fusion band "Steps Ahead", and a "Modern Times" album coupled with the crossover years when Fusion jazz popped into the scene, ushering in a new era and a kind of jazz never even seen.

Though before that, the late 1950s through the early 1960s witnessed a cast of sax players notably George Coleman, Pepper Adams, Gigi Gryce, Jackie McLean, David "Fathead" Newman and numerous others who had worked in all the jam sessions and recordings of trumpeter Lee Morgan's "Cooker," "Sonic Boom" and "Leeway" albums together with drummers Philly Joe Jones, Arthur Taylor and Charlie Persip in 1957; and pianists Wynton Kelly and Bobby Timmons for "The Cooker" album.

But again, there was another crew I'd talked over in many occasions with filmmaker Ben R. Caldwell while discussing African musicians in that era and before the crossover years - Herbie Hancock, Dizzie Gillespie, Chick Corea, Freddie Hubbard, Wayne Shorter, and the cast that Creed Taylor brought along with him when Kudu Records was conceived out of the sound engineer's home, which now hangs on the wall of Caldwell's KAOS Network Studios.

The crossover years changed a lot even though it lacked originality. Grover Washington Jr. had emerged accompanying Modern Jazz Quartet, Wayne Shorter and Joe Zawinul's Weather Report, the Brecker Brothers, Quincy Jones swings rolling in the same circle with Miles Davis' before the crossovers. Miles kept his pace with the traditional jazz settings and never left.

And all that, in 1948, Ghana's E.T. Mensah had brought his big band, the Tempos to Nigeria, and Orlando Julius Ekemode, only sixteen years old had experimented with the saxophone during Nigeria's 'Era of Good Feelings' when the colonists were coming about a fabricated nation. O. J., as he was known back then had his first encounter with one Ademola Haastrup. O.J. had left his little village of Ijebu-Ijesha to hang around Haastrup in Ondo where Haastrup played gigs in the local pubs, in order to kickstart his music career from around which he picked up emulating his protege.

With the Mensah pace, highlife music began to emerge in Nigeria and series of bands popping up in the townships; bands like I.K. Dairo and His Blue Spots, Ayinde Bakare and His Rhythm Dandies, Rex Lawson, Bobby Benson, Victor Olaiya and His Cool Cats, Roy Chicago and His Abalabi Rhythm Dandies and the man who would be a magnificent trumpeter by the name of Eddie Okonta. Around now, O.J. had begun to master his crafts and would be part of the opening for Louis "Satchmo" Armstrong who had opened the doors for everybody and the instrument that he played - trumpet.

And as the story goes, O.J. had begun to assemble his own band under the tutelage of I.K. Dairo, acquiring some instruments and making their debut as Orlando Julius and His Modern Aces Band at the Independence Hotel in Ibadan, in 1964. "The band walked a fine line playing highlife and popular Western styles while gently nudging the music closer to African roots," writes Gary Stewart who interviewed O.J. in the 1990s while the sax maestro was based in the Bay Area.

Back then, when Fela Kuti had not come around with a coinage in the kind of music that was emerging with Western style rhythms engineered by James Brown, Chambers, Afro-Cuban drumming before Kuti's Koola Lobitos of a highlife blend, Kuti was a regular at the O.J. Ekemode Modern Aces gigs in the Ibadan area. O.J. in his interview with Stewart on Kuti, recounts;

"He always stand near the stage with his trumpet [this was before Fela switched to saxophone], and just play along. So by that time I really like the way he played trumpet. I always go and pull him on the stage to play...he was playing jazz. And later on he found out that he has to come back to his roots before he can be known. And already, we were there."

For the record, Fela coined Afro Beat, though O.J. claims he used the word first and in the argument asking Kuti about O.J.s claims, Kuti said:

"It doesn't bother me, because I think because I have left something for them to investigate and try to do the best they can. But I think I have gone past that,... I have gone into more serious kind of thing now."

But as our arguments heated over time between Smith, the claim was afrobeat has been a universal music and had been played way before the coinage. Smith's argument is one thing and O.J.'s claims are another piecing together the evolution of the music itself and the casts that brought it to the fore.

However, O.J.'s first recorded hit was "Jagua Nana" recorded at the Philips West African Records Studios in 1965, a term he had used to record the track from the post-colonial era British Jaguar sports car stereotyping the psychedelic ladies of the era, and typical of fast girls, fast cars and fast life - the trend depicting what highlife had actually become in its literal meaning.

But then, a whole lot had followed the trend in women, the music and all that came along with it. And with the foreign imports of the 1970s and 1980s, marketing locally produced artists waned which compelled most to seek better playing times elsewhere.

O.J. would leave the African Marketplace with a waning highlife that had switched to many combed out musical genres, and especially a remarkable session men from the "Eastside" who had left during the Pogrom and eruption of the Civil War in Nigeria. Some on the "Westside" had to regroup from the vacuum created by performers from the "Eastside" which brought about the coinage of another musical genre, "Juju" music, though similar in tunes save for the drumbeats.

While in the United States in the early seventies as market turned sour in Nigeria with an overdose of foreign imports, O.J. regrouped and formed a new band "Umoja" in the Washington, D.C. area playing gigs at local clubs and related events. The market picked up in his assessment when he bumped into legendary trumpeter, South African-born Hugh Masekela who was at the time scouting for African musicians in the United States. Masekela had fallen apart with members of his session band, Hedzoleh Soundz and was looking for new ideas in his musical journey. It was at this time that the two (O.J. and Masekela) teamed up with O.J.' Umoja and some remaining members of Hedzoleh Soundz recording two albums, "The Boyz Doing It" and "Colonial Man." "The Boyz Doing It" album featured the smash hit "Ashiko"

O.J. dissatisfied for some reasons would fall out with trumpeter Masekela, heading to the San Francisco Bay Area for engagements with a regularly changing band personnel, compelling him to disband from time to time. After some session work in the Los Angeles area, O.J. landed an acting role in the television series "Roots: The Second Generation." Upon his small role with the casts of "Roots," O.J. relocated again to the Bay Area bumping into Joni Haastrup, some members of the previous Hedzoleh Soundz and Cameroonian-born guitarist Jean Koh Elong in what would be a reunion of African musicians who gathered at Michael's Den for jam sessions and occasional gigs in the hood.

In 1984, O.J. left the shores of America and went back to Nigeria, facing a music market that was full of uncertainties where he had formed the Nigerian All Stars Band with engagements in and around the country before landing tour dates to play again in America with his 18-member band in New York City.