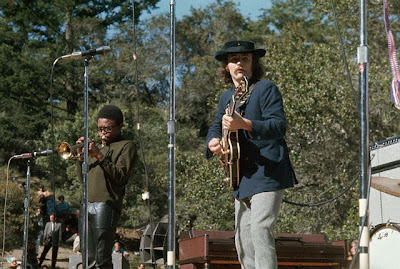 The Magic Mountain Music Festival was an event held June 10 and 11th, 1967 at the 4,000 seat Sidney B. Cushing Memorial Amphitheatre high on the south face of Mount Tamalpais in Marin County, California.

Canned Heat, Every Mother's Son, The Merry-Go-Round, The Mojo Men, The Seeds, Blues Magoos, Country Joe and the Fish, Captain Beefheart, The Byrds with Hugh Masekela on trumpet, Tim Hardin, The Sparrow, The Grass Roots, The Loading Zone, The 5th Dimension and Jefferson Airplane were among the performers who appeared. The Festival was also The Doors' first large show and happened during the rise of the group's first major hit, "Light My Fire", to the top of the charts.

To some commentators, the festival represented a sea change in musical preferences among young Bay Area radio listeners as the hippie culture fully arose in mid-1967. Alec Palao and Jud Cost chronicled the San Francisco mid-sixties era music scene in 1991 in their magazine Cream Puff War #1. Writing about the weeks surrounding the Fantasy Fair, Cost noted that "the dichotomy in Bay Area music was never so evident, as the self-proclaimed "adult" scene separated itself from the "teen/pop" scenes."

Scram Magazine juxtaposed that view with pioneer rock magazine editor Greg Shaw's recollection that the rift between the tastes of teens and adults didn't form until later, after the freeform radio style then being established by Tom Donahue fully emerged in the fall of 1967.

A review of the bands that played indicates that most were groups that played the Fillmore and Avalon ballrooms and were part of the psychedelic rock scene at the time.

While the highly documented Monterey International Pop Festival continues to be remembered as the seminal event of the 1967 Summer of Love, the Festival took place one week before and was, by many accounts, the first rock festival in history, although not the first electronic music festival