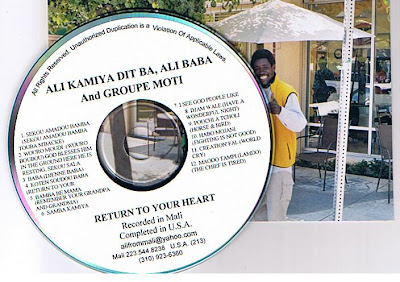 "Black Township" and the historical Leimert Park is Ali Baba Ali Kamiya Dit Ba's hangout. He shuttles back and forth Degnan Blvd. and 43rd Pl selling and promoting his CD produced locally in Los Angeles.

Spending time and recording this twelve track songs in his native Mali before sojourning to the shores of the United States to compose and produce the album, much went amiss for Ali Baba in locating his market for the kind of music that is rare in urban Los Angeles. He had been discovered by a Santa Barbabra tourist in Bamako, nevertheless, and he had shown his potentials as a desert bluesman, convinced and good enough to make things happen in every aspect of showcasing his talents in the United States. It did not work out well. Ali Baba fell out with the scouts who were about to blow him up. Kind of cinderella story turned sour, huh? "That's life," Ali Baba would say.

When I listened to the CD, there was much influence of Farka Toure vibes which sums up the original Malian theme played with ngoni, an ancient 5-stringed lute which has been around before the kora. Ali Baba talks much about purity and the effect that would have to the world had every single soul been pure in heart. The CD titled "Return To Your Heart" according to Ali Baba, is a reflection of knowledge passed on to him by his ancestors which indeed has made him beat all odds despite the hardship and struggle to overcome his predicament. Ali Baba is a moslem and still shuttles around the "Black Township" neigborhood preaching and selling his CD.

The tracks aren't bad at all. It's typical Malian folklore, the origin of the desert blues. Ali Baba once performed to a cheering crowd at the popular Temple Bar in Santa Monica, California. For ten bucks you will get a copy of his CD and blessings for a peaceful world. I got mine for that price without questioning and bargains. It's just a way to support our own, and "that's life."

Anonymous said…
Hey, I met this charismatic fellow in Santa Barbara CA while he was busking and selling his tunes. Here's a link to the Myspace page for Ali Kamiya Dit Ba Ali Baba.
December 31, 2007 at 4:33 PM

It's good he's getting the exposure he needs now to develop his talents and reach newer heights. I have checked the site and I think something big is underway.
January 1, 2008 at 5:11 AM

Unknown said…
Thank You for the nice words!

please check my back catalog as well as my new music out for your pleasure at lastfm
I want the world to hear what I am up to!
Peace and love to everyone for 2008.
January 4, 2008 at 12:13 PM

Be rest assured I'm following every detail of your progress and it's good to know a whole lot has improved and the best is yet to come. Keep it up, we are behind you.