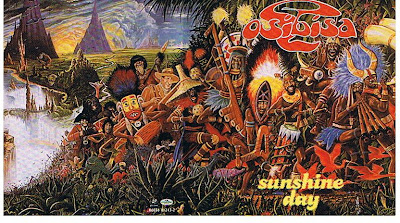 I think Osibisa proved a lot with how they changed and revolutionalized African rhythms when the word Afro Rock was coined as a trademark to the kind of music Teddy Osei and his colleagues invented which started World Music.

Prior to Osibisa's deal with the Bronze label, the group was originally cntracted to Warner Brothers/MCA Records in its early years when the album "Osibisa Heads" was released on the MCA Record label. In 1976, Osibisa signed with Bronze Records and the first single "Sunshine Day" was released on the Bronze label. This vocal and instrumental group would record three albums--"Welcome Home," "Ojah Awake," "Mystic Energy"--thereafter with the Bronze/Pye label. Just as some African musicians have had to make themselves known or gain fame in their native land or to make their reputation, Osei, Mac Tontoh and Sol Amarfio did not need all that. Osibisa's hit in its early years and during the Bronze/Pye years went high in UK and the US without even being heard in the group's native Ghana and elsewhere in the Caribbean.

The Bronze/Pye Anthology starts with the single "Sunshine Day," and later released as an album titled "Welcome Home." "Welcome Home" was a major hit which firmly established the group as the originators of World Music even though founding members Spartacus R. and Robert Bailey had already left the group when percussionist Kofi Ayivor, bassist Mike Odumosu and pianist Kiki Gyan were ushered into the group.

From the liner notes and music critic Rob Corich's interview with Teddy Osei in 1999, the Bronze/Pye Years of Osibisa was a stepping stone to the group's enormous success:

Osei: This came about after we had done two albums for Warner Brothers. Bronze were our managers and they negotiated us over to their label.

What do you think about the album today?

Osei: I think we set the pace for some of the more modern music. We had a lot of ideas which were ahead of their time and Bronze, being an independent company, worked very hard to push our new direction.

What about the more commercially-minded follow-up album, Ojah Awake?

Because of the success of Welcome Home, Bronze wanted more of a radio sound. They were the record company and we went with the flow and we were already attracting a different audience--and with Ojah Awake, we ended up with three good hit singles. "The Warrior," "The Coffee Song" and "Dance the Body Music," so it worked, I guess...

The third album, "Mystic Energy" was released on the Pye label done by the group's management company, Flying Elephant, when the group parted ways with Bronze.

Ambrose Ehirim said…
I did "Osibisa Heads" sometime ago in a compilation I had called "Jungle Beats." I will do it again which should include the band's US tour in the 70s.
February 9, 2008 at 4:21 PM