Matata and the Pure Funk Era 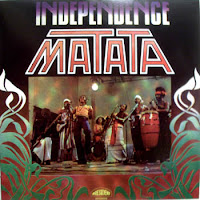 I had thought I should start my African musical commentary from a different perspective, revisiting the years when London pubs were invaded by London-based African bands who had been inspired by the legendary Minister of New New Super Heavy Funk, James Brown, also known as the Soul Brother Number One. London was bursting loose with jam sessions in all pubs and music bands were performing like crazy. Matata had contracted an all star cast of musicians to feature in its debut album titled "Independence Matata."

The awesome solo alto Sax of legendary South African, Dudu Pukwana who had brought along with him the traditional tunes of Township Music gave the Independence Matata album the real jazz-fusion blend which did catapult Anwar Richards and his Kenyan-born colleagues to the top when the album was released in 1974.

Matata was a band that hired the best in recording sessions. The legendary trumpeter Sammy Obot who in the sixties had played for a series of highlife bands when highlife had exploded in Ghana was part of this fine album using his magnificent skills to give the album's recording the flavor that earned the band the reputation as one of the very pure funk bands modeled after the Godfather of Soul even before the funktified versions of Uncle Jam's Army of General George Clinton popped up with all that grooved funk that created Funkadelic, Parliament and joining funkster Bootsy Collins and his Rubber Band Family. 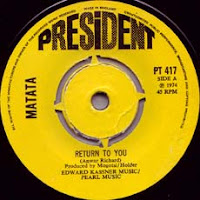 There was also the bongo player Patrice Oluma who had originally been part of the founding members of Matata but later on went solo and added some Latin American jazzy tunes to his new solo career. His radical drum beating gave the track "Return To You" the authentic jungle beat typical of London-based African musicians who started invading London pubs way back in the fifties. Guyana-born tenor Saxophonist Colin Dyall made his impact known, as well, when his Caribbean flavored jazz tunes created some kind of wave that gave the entire album a different touch, differing from the highlife blends of Osibisa, later coined Afro Rock. Dyall had left his homeland to play gigs in London pubs when he was discovered by President Records Label chief executive, Edward Kassner, who scouted the London metropolis for talented musicians.

Anwar Richards, whose data is hard to find applied his strained James Brown kind of vocals running simultaneously with the chords of Tobby Kombo, Andrew Yonah and Isaac Kisembe. These brilliant performers who had arrived London from their native Kenya changed entirely how the pubs were managed with a little touch of everything in music. The jazzy tunes of the funky horns with some Afro Beat flavors, the strings that changed the concepts and brought out the vibes of James Brown alive turning every jam session to a crowded house made Matata a talk of the town in the mid-seventies.

The tracks "I Feel Funky" and "Talking Talking" is a mind-blowing piece and I would suggest you better watch out. The groove is unquestionably too funky.

There's a message in the music if you belong to the funk era.
Email Post

Lee Hee Hyo said…
you know what. i really admire the way how africans sing, i wonder where they get their deep husky voice. Mariah Carey has a voice of a black.