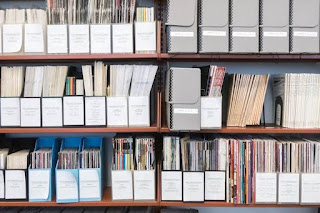 The Center for Black Music Research stacks–Photo by A. Wong via I Care If You Listen

Melanie Zeck is an ethnomusicologist, editor, and research librarian who has served a fundamental role at the Center for Black Music Research in Chicago; at the CBMR she is not only a research fellow but also works as managing editor of the Black Music Research Journal. Along with Sam Floyd and Guy Ramsay, she is a co-author of the book The Transformation of Black Music: The rhythms, the songs, and the ships of the African Diaspora, which argues against the exclusion of African music from “classical” music traditions and historiographies. Zeck previously served on the advisory committee for the Chicago Symphony Orchestra.


CAN YOU FIRST PLEASE DESCRIBE YOUR WORK AT THE CENTER FOR BLACK MUSIC RESEARCH, AND THE WORK OF THE CBMR MORE BROADLY?
In 1983, the Center for Black Music Research (CBMR) at Columbia College Chicago was founded by Samuel A. Floyd Jr. to serve as the only organization of its kind. Now in its thirty-fifth year, the CBMR exists to illuminate the significant roles that black musics play in world culture by:
serving as a nexus for all who value black musics
promoting scholarly thought and knowledge about black musics
providing a safe haven for the materials and information that document the black music experience across Africa and the Diaspora.

At the Center for Black Music Research, we match researchers with the relevant sonic, primary, secondary, and reference materials that they need to answer questions, plan exhibits, program concerts and recitals, write books and essays, or simply to satisfy their curiosity. Every year, the CBMR receives inquiries from individuals around the world who are interested in the musics—historical and contemporary—of the African Diaspora.

As a librarian and musicologist, I, along with my colleagues, support our diverse constituency in two different—but complementary—ways. First, we assist researchers in cutting through the informational “red tape” by finding and suggesting useful resources in our library and archives, which work together to support the CBMR’s mission.

Each of these items pertains in some way to the making and dissemination of musics in the African Diaspora. Researchers are shocked to learn that we have pieces (including motets, madrigals, symphonies, string quartets, solo works, etc.) whose dates of composition range from 1551 to last year!

Second, we facilitate the contextualization and use of these resources by casting them against the backdrop of historical precedent, cultural bias, and shifting trends within the field of black music research and its allied disciplines. We help “connect the dots” between and among resources that have been marginalized or ignored in mainstream academic discourse so that broader issues can be considered in their totality.


WHAT ARE SOME WAYS IN WHICH CURATORS AND PERFORMERS COULD MOST EFFECTIVELY ENGAGE WITH THESE ARCHIVES AND HISTORICAL DOCUMENTS FROM THEIR POSITION IN THE PERFORMING ARTS?

We encourage all researchers to consult our five-part “Black Music Research Matrix” model, which serves as a guide to the most effective strategies in using sound recordings and physical/visual representations (scores/charts/notations) in conjunction with primary (archival), secondary, and reference materials.

Curators and music makers (including performers, conductors, and composers) are particularly well-suited to using our collections as they plan exhibits and program concerts and recitals. For example, curators can explore the full implications of a topic, concept, or genre when they have access to both the product—that is, a book, a score, or a recording—and the process—that is, the original source material employed by the producer that is now located in the archives. In many cases, a final product is simply that—one polished item that has emerged after months and years of preparation. In contrast, the primary resources can be examined for information regarding the musical, cultural, and socio-political milieu in which the producer was operating.

Primary resources benefit music makers, too, even though they come to the Center for Black Music Research for a different reason than curators. At first, they may question the value of traveling all the way to a library and archives just to listen to an old LP—especially when they can hear just about anything on YouTube or Spotify from the comfort of their living room. But once they see the LP in its original jacket (complete with the original program annotations, commentary, and striking visual art) and hear an original recording (in its original format), they quickly change their mind. It’s as though they are transported back in time.

Interestingly, music makers don’t realize that they are the perfect people to “activate the archives”—in fact, I’m always excited to witness how, over the course of their research visits, they regularly (re)discover, recover, and uncover pieces (sometimes still in manuscript) that have never been published—much less recorded. By drawing on the wide variety of resources at the CBMR, performers, conductors, and composers become more confident in making appropriately informed decisions about these “new” pieces and, more importantly, they cultivate the knowledge necessary to serve as advocates for this music with their future audiences.


ALONG THOSE LINES, WHAT DO YOU FEEL ARE THE MOST EFFECTIVE WAYS FOR ETHNOMUSICOLOGISTS AND OTHER FOLKS WORKING SOMEWHAT “BEHIND THE SCENES” TO ENGAGE WITH THE MUSIC WORLD IN TANGIBLE AND EVEN POLITICAL WAYS?


Academicians—including ethnomusicologists and practitioners in allied disciplines— are frequently called upon to lead their communities in social, political, and cultural activities for which specialized musical knowledge is necessary. For example, earlier this year, the Center for Black Music Research fielded numerous inquiries related to the ways in which music was and could continue to be employed in celebration of Martin Luther King Jr.’s life. In most of these cases, the inquirers had already exhausted available resources on the songs of the Civil Rights era, but they were thrilled to learn that the CBMR could guide them toward the dozens of ensemble (choral and instrumental) pieces listed in Anthony McDonald’s The Catalog of Music Written in Honor of Martin Luther King, including Undine Smith Moore‘s Scenes from the Life of a Martyr and Charles Dickerson‘s I Have a Dream, among others.

McDonald’s catalog is just one of several reference resources that the Center for Black Music Research uses on a daily basis. In some academic fields, however, reference materials—especially the printed ones—are considered outdated or even passé, and substantial efforts have been made to update and digitize them. But, in black music research, some of the most robust reference resources are available only in print and have yet to be superseded. In other words, these resources remain essential, and even today, they serve as excellent starting points for academicians who need assistance in finding appropriate music quickly. Moreover, because the CBMR has access to historical, biographical, and musical information about the composers in McDonald’s catalog, inquirers were supplied with much more than just the title of a piece. As such, they were able to create multifaceted activities for their communities, in which these musical selections played a central role.


WHAT ARE SOME OF THE WORKS BY BLACK COMPOSERS THAT YOU WISH WERE PROGRAMMED MORE FREQUENTLY?

I’m fascinated by instrumental pieces in which black composers infuse European constructs with Africana idioms. This phenomenon was popular, particularly in the 1930s, as it exemplified greater socio-political and aesthetic impulses that were driving Diasporic musicians on both sides of the Atlantic Ocean. For example, Nigerian composer Fela Sowande wrote his five-movement African Suite in 1930, which is the same year that William Grant Still composed his Afro-American Symphony. Sowande used a popular West African highlife tune in the fifth movement of his suite, which was scored for string orchestra, and Still included a banjo in his otherwise standard symphonic orchestration.

Similar musical fusions can be found in the works of Florence Price and William Levi Dawson, among others. Price’s Symphony No. 1 (1933) and Symphony No. 3 (1940) both employ a juba dance (with its syncopated rhythms undergirded by a duple meter) in the third movement, which, in standard European symphonies, is usually composed as a waltz, minuet and trio, or scherzo (with the traditional triple meter). Dawson’s Negro Folk Symphony (1934) is based on Negro spirituals, which are rendered solely through instrumental means. Singly and collectively, these pieces by Sowande, Still, Price, and Dawson broaden our concept of what a symphony is, what it does, and what it signifies.


DO YOU HAVE STRATEGIES TO RECOMMEND TO PERFORMERS AND CURATORS—ESPECIALLY THOSE WITH MUSICAL TRAINING GROUNDED IN THE LARGELY HOMOGENEOUS CANON—AS THEY INTEGRATE BLACK MUSICS INTO THEIR KNOWLEDGE BASE?

Center for Black Music Research founder Samuel A. Floyd Jr. used to remark that, at one time, he had read every single book on black music, which, he would go on to say, was easy because there were not that many books to begin with. Now, the CBMR’s collection is among the largest and most comprehensive in the world.

From this collection, three books stand out because their coverage provides the kind of information that most canonically trained musicians will need as they integrate black musics (especially those in the classical idiom) into their knowledge base.

Eileen Southern’s Music of Black Americans ([1971] 1997, 3rd edition) provides a detailed narrative of black music history in the United States and can be read cover-to-cover or used as a reference resource.

Floyd’s International Dictionary of Black Composers (1999) profiles over 100 composers, whose dates of operation span 450 years, and provides biographical information, theoretical (analytical) essays on select pieces, and a bibliography for each entry.

The study of black musics also requires a broad understanding of Diasporic history and cultures, which is typically marginalized (if not omitted) at the curricular level in American schools and departments of music. Just as resources on black musics have become much more readily available over the past fifty years, so, too, has the history of Africa and its Diaspora been covered extensively in books and scholarly journal articles. Given the sheer quantity of resources, I suggest that curators and music makers (including performers, conductors, and composers) visit their local libraries or browse online to find the type of writing style and coverage that suits their informational needs and time constraints.

I also recommend browsing the older editions of African-American newspapers, such as the New York Amsterdam News, the Chicago Defender, the Indianapolis Freeman, and the Pittsburgh Courier, because they kept their metaphorical finger to the pulse of all things cultural in their respective cities and, thanks to their networks of correspondents, throughout the Diaspora.

My hope is that all black music researchers—curators, music makers, and academicians—consult these printed resources and then explore the Center for Black Music Research’s holdings as they seek out and execute innovative programming and writing projects.
Email Post
Labels: Interview Society West Africa World Music