Janet Joplin Would Have Been 70 Today 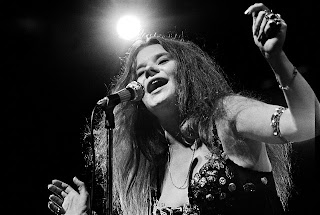 Saturday, January 19, marks what would have been the 70th birthday of Janis Joplin, the legendary singer whose passionate, blues-rock style has gone on to influence generations of female artists, including Stevie Nicks, Heart‘s Ann Wilson, Melissa Etheridge and Pink.
Joplin began her career as the lead singer for Big Brother & the Holding Company in 1966, and her talent was so outstanding that Vogue magazine declared her “the most staggering leading woman in rock.”  After she left that band in 1968, she started a new group, The Kozmic Blues Band.  After performing at Woodstock in 1969, they broke up, and Janis put together another group, The Full Tilt Boogie Band.  But the singer, who struggled with addictions to both heroin and alcohol, was found dead in a Los Angeles hotel room on October 3, 1970.  The cause of death was a heroin overdose.  In 1971, her first true solo album,Pearl, was posthumously released.  It became her most successful album, reaching the top of the Billboardchart, and featured the #1 hit “Me & Bobby McGee.”
Posthumously inducted into the Rock and Roll Hall of Fame in 1995, Janis Joplin received a Grammy Lifetime Achievement Award in 2005.  Later this year, she will be honored with a star on the Hollywood Walk of Fame.
........ABC 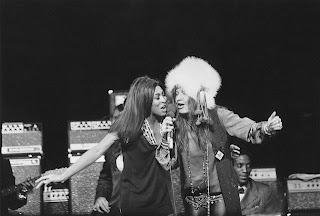 Tina Turner and Janis Joplin singing together. Tina, in dress by Dorothy Morgan, was on tour with the Rolling Stones; Janis is wearing a white fur hat. ca. 1970.