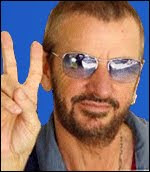 According to CelebrityNetWorth.com, former Beatles sticksman Ringo Starr is the richest drummer in the world. Ringo is worth about $300 million, says the site.

Starr wrapped his tour last month in grand style, closing out the final show at the Greek Theater in Los Angeles with "With a Little Help from My Friends."

During the show, Starr did indeed get a little help from his friends, including Joe Walsh, Micky Dolenz of the Monkees, Matt Sorum (Velvet Revolver) and Peter Frampton.