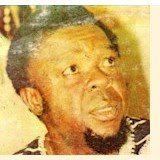 IF Eddy Okonta, the late great trumpeter and highlife musician were still alive, today's musicians would be learning the technique of articulating 'rhythm' as an essential musical component at his feet. While he lived, he pretty well appreciated the fact that the main essence of African music is 'rhythm' and he used it to full advantage, thoroughly Africanising his own brand of highlife in the process.

He had served an initial apprenticeship with the Sammy Akpabot Sexlet, an aggregation that revolved this same name even as it increased or diminished with time. He was there with the late Oba Funso Adeolu on auto and tenor saxophones. He enjoyed sharing solos with him while bandleader Akpabot himself provided an ideal background for highlife and dance music to blossom with his dexterity on the vibraphone, an instrument which only Akpabot could play at the time in the whole of West Africa.

As an instrument, the vibes has a special way of resonating sounds and floating them through harmonies and arrangements. But Eddy's high notes helped to put all the reverberation in check for dancing and easy listening.

Eddy later served a long term of apprenticeship with the late Bobby Benson of Africa, this time culminating in outstanding professional musicianship, with proficiency in arranging and composing. He not only put the final polish to his accomplishment with the Bobby Benson Jam Session where he stood out the way Chief Bill Friday and Zeal Onyia before him did, his artisting now reached its apotheosis in the area of improvisational design. He began to use the vast resources of his creativity to construct solos that contained revolutionary melodic language and rhythmic subtlety.

As one of the pioneering big bands in the country, the Bobby Benson Jam session offered all its graduates a well rounded musical experience and discipline as they were exposed to all dance music forms including swing, Latin American , Jazz, Afro Cuban, the ball room type that dominated the colonial era with the music of Joe Loss and Victor Sylvester, and all.

Eddy was not only involved in this unique experience, he was also part of the revolution, the formative processes of highlife which eventually led to the studio recording for the big hit, Taxi Driver, Bobby Benson's greatest.

It was not surprising therefore that when he eventually struck out on his own in the mid-fifties to form his star Aces, he had a wealth of experiences to draw from. He did not find it difficult to establish a highlife direction for himself. He immediately became the resident band at the paradise night club in Ibadan, the Oyo State capital. He became the new highlife Sensation attracting people to his shows from various parts of the country who came to dance to live performances of such hits as Asili, Oriwo, Abele, Okokoko, Otajele among many others.

But perhaps the greatest attraction for the dance floor community which was usually packed, was the prolonged version of Abele, a Ghanaian hit song previously made popular by Emmanuel Tetteh Mensah, but given a rhythm treatment whose arrangement refereed a repetitive figure behind singer Nat. Buckle.

Abele had away a detailing into Oriwo, Eddy Okontas original composition whose essence was derived from rhythm, with Buckle at his very best.

The same enthusiastic fans followed him to Lagos in the mid sixties when he moved bases, playing at Central Hotel Yaba where he alternated night stands with other musicians.

I had been a fan of Eddy Okonta all the way from Ibadan but I came into close contact with him in the 70s as music producer with Radio Nigeria. I recorded him extensively for Dance and highlife music programmes.

It became extremely difficult at this time to maintain and keep a band type that Eddy had preference for, for economic reasons. Consequently, for all engagements, including radio and television shows, he relied on ad-hoc arrangements with session men. He had such a large pool to draw from that the sessions looked like 'United Nations' kinds of groups, assemblies of musicians from various backgrounds and settings who had not rehearsed enough to be able to blend together. But he had the organising ability of a good bandleaders, and the musical talent for grooming musicians on the spur of the movement, at short notice, to play whatever he wanted.

Most of his colleagues sounded boring with the same repetition of their old songs in live performances, but Eddy Okonta's evergreens were often revitalised because he introduced new elements and perspectives to a song each time he played it.

Eddy's trumpet was one of the strongest on the scene as strong as Chief Bill Friday's or Zeal Oniyia's. As a trumpeter, he played around with the top most notes most of the time, moving in and out with ease in the manner of Louis Satchmo Armstrong ad Harry James.

Another attribute which set him apart was the propelling force of his rhythmic concept which made dancing irresistible; and it is no wonder at all that he stole the show in 1983 at a highlife might organised by the late impress and, Steve Rhodes at the Glover Memorial Hall were several other band performers.

Eddy Okonta has a lot of singles to his credit, but has recorded two albums, with the very first being one of the biggest hits in West Africa even though it failed to make the desired impact in terms of sales because of poor marketing and promotion.

Titled, Victory, Fire back To Town, the album was recorded in 1978, at a time highlife was already unpopular, with promotion, it would have surpassed the Ramblers Hit Sound which had Eddie Floyds knock on wood watered down to highlife.

Influenced by the prevailing tradition of that period, the songs, three of them, have taken on long duration, an attract which helped to shore up highlife to the level of juju music in terms of popular appeal, danceability and as a social music type.

Eddy Okonta had always had the knack for big band highlife, and on this recording session, he paraded a 17-piece band where he sang and played the trumpet.

The most attractive material, and the one which continues to recommend the album is Bisi, a girl's name, based on a melody that has been in existence for years, and has been popular with highlife since its palm-wine oriented days. It is the second track on the second side, preceded by the one he calls life, a monologue that ruminates on the elusive possibilities of man's existence. The first side is one whole groove titled Janeth 78 Nkwuto.

Recorded on Ekimogun label, the entire session was arranged by Eddy Okonta who also played trumpet and acoustic guitar, saxophonist and highlife star Etim Udo, who was at the time a polygram recording engineer also made production inputs that boosted the quality of the sound and the overall cohesiveness of the ensemble.

However, based other success of this album, phodisk records signed Eddie Okonta on for a follow up in the 80s. Titled Obi of Trumpet, the album paraded a good choice of songs which were all marred by poor production, even though the studio was supposed to offer one of the best facilities around.

Notwithstanding, this recording did not in anyway detract from the fact that Eddie Okonta was truly the Obi of trumpet.
Email Post
Labels: Benson Idonije Eddy Okonta Highlife World Music